Earlier this week I made a rookie baking mistake. I added baking soda, not baking powder to my biscuits. I make these biscuits all the time. They are fantastic. But for some reason, I blanked and added the wrong ingredient. For a few hours after the biscuits came out of the oven I was apologizing, trying to rationalize, and come up with a way to salvage. Yes, it sounds dramatic that I was beating myself up over biscuits – but it happens to everyone. We get down on ourselves for making mistakes and tell ourselves that we “should have known better.” Sometimes, we even quit.

The next day I made “redemption” biscuits because I wanted to prove to myself (and my husband) that I could do it correctly. To be clear, he didn’t ask me for a redo. He knew I was completely capable and that it was just a mistake. When I slowed down a little I was able to make sure I didn’t mix up the ingredients this time.

Here are the redemption biscuits. I didn’t take a picture of the first batch because I was too embarrassed: 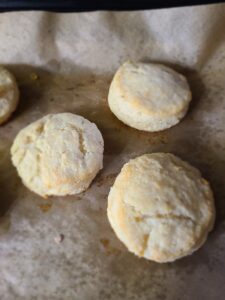 The reason I bring this up is because we all make mistakes. It’s how we handle them that makes the different. I thought about sobbing and never making biscuits again but then I’d be denying myself some warm, flaky, buttery goodness.

In addition to occasionally baking, I also own a business where mistakes happen all the time. It’s been a very humbling experience to go from “I know everything” to “I have no idea what I’m doing.” While figuring it out on a daily basis, I’ve been trying to create a culture where failure is  not only acceptable, but also encouraged.

Why would I encourage failure? Because it’s part of learning and growth. If you’re too afraid to try and fail, you cannot succeed. You will forever be stuck in the same place, never changing. I don’t know about you, but that sounds like an awful existence and a terrible way to lead a company.

Think about your marketing or your operations. I can guarantee with certainty that things don’t go smoothly every single day. Maybe you sent out a post with a typo (who hasn’t) or maybe you wrote down a process incorrectly. Maybe you captured the wrong data. It’s easy for me to sit back and say, “don’t worry, it’ll be fine” but I’m going to do it anyway. Don’t worry, it’ll be fine. The way to recover is to acknowledge the issue and then work backward to fix it. Then roll it out again. Hiding from it or pretending it didn’t happen will make it work. I promise you that.
When I was a product manager, my team and I would occasionally miss something during the QA process and the system would go live with bugs (or errors). The first few times it happened I would panic. Full-blown hyperventilating. Once I realized the world wasn’t going to come to a screeching halt it became easier to manage. Don’t get me wrong. I wasn’t encouraging the team to miss things, but it happens. I started to understand where to look for potential errors. I practiced how to talk to stakeholders and customers. I kept a list of what questions to ask about getting a swift resolution. Yes, recovering gracefully from mistakes can be a learned skill and take practice.

Here’s the bottom line. We all screw up. Sometimes it’s a big deal, and sometimes it isn’t. Just like death and taxes, mistakes are inevitable.  My advice? Allow yourself to feel bad about it. Don’t try and push that feeling away. Once you’ve wallowed, try again. Learn from what happened. Document your journey. Celebrate your wins no matter the size!

2 Replies to “Recovering from mistakes”